(No, no, not us)
Our mast is so stubby that it would be pretty unlikely that we could suffer a dismasting.  It would probably take a complete removal of the pilothouse...something I'd rather not think about.  But here's what happened.  It all started with:

0740 - Warm up the engine.  Anchor up five minutes later.  We headed north out of Cocoa Beach.

0920 - We pass beneath the NASA causeway.  We have been looking at NASA's HUGE Vehicle Assembly Building (VAB) for quite a while.  It is large enough that they can assemble the entire Space Shuttle vertically.  Needless to say, it dominates the landscape - its visible for miles and miles.

1010 - Pass beneath the Titusville Causeway Bridge.  They are demolishing the old swing bridge, having replaced it with a high rise model that will eliminate slowing down both boat and vehicle traffic.

By 1115 we are approaching The Haulover.  This canal connects the Indian River with the famous Mosquito Lagoon.  If you are a fisherman you know that this is Redfish Central.  People come from all over the country to fish for huge reds here.  Chip would be going crazy right now.

Shortly after 1420 we get to the No Wake Zone that surrounds New Smyrna Beach.  It is welcome to not be waked by big go-fasts and sportfish boats but it sure slows down the travel.  By 1500 we are at Rockhouse Creek, a possible stop for the night.  It looks like a great anchorage but its Sunday afternoon and the anchorage is full of day-trippers with the stereos cranked up full blast.  They will be gone in two or three hours but it just doesn't look like a fun place to stop right now so we decide to continue on to Daytona Beach.

By 1645 we are at Daytona Beach and in ten minutes we have the anchor down.  We have made a nice day's run of 67 miles.

The anchorage we like in Daytona is between two bridges.  Actually there are several anchorages spread out along the shore line.  This the one we have used before and like it because it is in a No Wake zone and protected from the prevailing breeze.  Kinda' like Goldielocks - not too big, not too small, its just right.

This brings us back to the beginning of the story.  We were sitting in the breeze and shade up top, enjoying a glass of wine and listening to Toad The Wet Sprocket doing an acoustical medley of their greatest hit on Sirius satellite radio when we heard the bridge blow its horn.  The horn sound was followed closely by a loud crashing sound.  Out of the corner of her eye, Cindy saw the masts falling down on a motorsailer that was going under the bridge(without opening it)!  "Finlandia" was being single-handed.  The owner was steering inside the pilotouse and just had a HUGE brain fart.  He forgot to ask the bridge to open and the next thing he knew, the whole rig was falling down around his ears!  He came into the anchorage area and anchored up and started to assess the damage and wait for the Coast Guard and the Florida Marine Patrol to come out and start the paperwork.  I'm sure that there was plenty of that.  Some days you are the windshield and some days you are the bug! 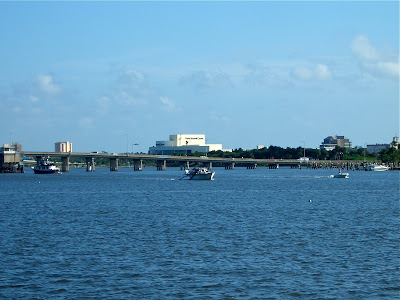 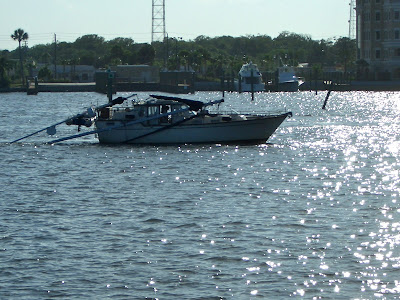 The DOT had to close the bridge for two hours while they called out an engineer to inspect it (on Easter Sunday evening).  As if his day wasn't bad enough, he was fined $120!
Posted by rwp at 2:24 PM

Where is Morning Star?