WILL STEER FOR FOOD

Mike Warren has a good memory. Mike is our boat insurance agent and fellow Krogen owner. Mike also holds a 100-ton Coast Guard captain’s license and often does deliveries for Krogen owners up and down the east coast of the US. Last fall I mentioned that I might be available if he ever found himself in need of a crew. Recently, out of the blue, I got an email from him inquiring as to whether I was available in May to help him deliver a new Krogen 48. Since we were already planning to be in Georgia about that time, it was a perfect fit. Before I even asked Cindy, I asked Mike if we needed a cook/able-bodied seaman. He picked up on the hint immediately and asked if Cindy would go too. It was settled. We would go to the Port of Savannah on May 12, off-load a factory-new Krogen 48 from the freighter and deliver it to Stuart, Fl. for commissioning.

I had returned to Clearwater for a week and drove back to Brunswick on the afternoon of May 10th.  We did boat chores the next morning and Mike showed up in his rental car later that afternoon.  Mike stayed overnight with us aboard Morning Star and we left Brunswick after an early breakfast, headed to Savannah.

Thursday, May 12, 2011
Our plan was to meet Larry Polster, VP of Krogen, as well as George Stalker (sp?), one of Krogen’s contract technicians, at 9 AM to get our security clearances in order.  Port security is handled by the TSA, the same folks who have brought us the wonderful security theater at our airports.  You know the TSA…the folks who pat down small children and grandmas in wheelchairs, looking for God-knows-what, all the while avoiding the young man with a dark complexion and nervous eyes for fear of “profiling”.  Yes, that TSA.

The ship was scheduled to arrive at 1 PM.  After stopping at three different offices we finally had our paperwork in order. (We sent in our names and ID’s in advance and were pre-cleared.) But they wouldn’t let us in the port that early so we had to kill a few hours.  Starbucks did just fine.  Caffeine and sweet rolls for lunch…little did we know we were going to need it.

At 1 PM we were allowed into the port and left to find the ship on our own.  It didn’t take long to find the HUGE containership, the Ever Decent, one of the Evergreen Lines ships.  She was 945’ long, 108’ beam (wide).  Did I mention that it was HUGE?

The ship was stacked to the sky with containers.  We found the head longshoreman and found out that it would be at least another 1-1/2 to 2 hours before they would be unloaded enough to remove the huge hatches (the “lids” in their vernacular) and uncover the boat.  So we waited.

Finally we got the go-ahead to board the ship and start preparing for unloading.  We descended into the bowels of the containership and found the boat is remarkably short order.  To prepare the boat for shipping from Taiwan all exterior surfaces are covered with Peel & Stick plastic.  We had to get as much of this off the boat as possible before we were unloaded.  The windows were first.  George dry-started the engine to make sure that we could get underway quickly once we were splashed. 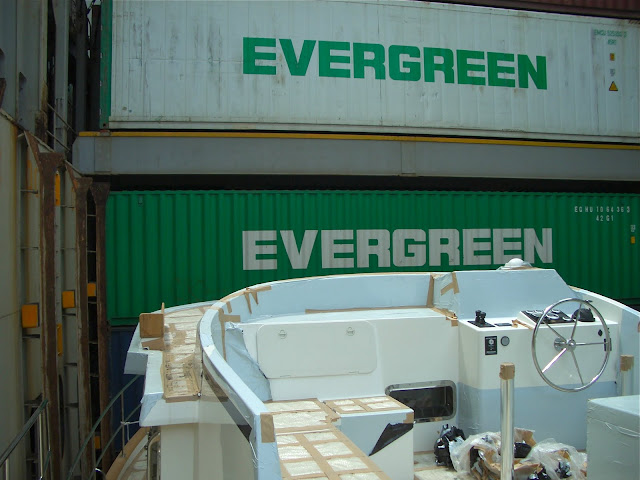 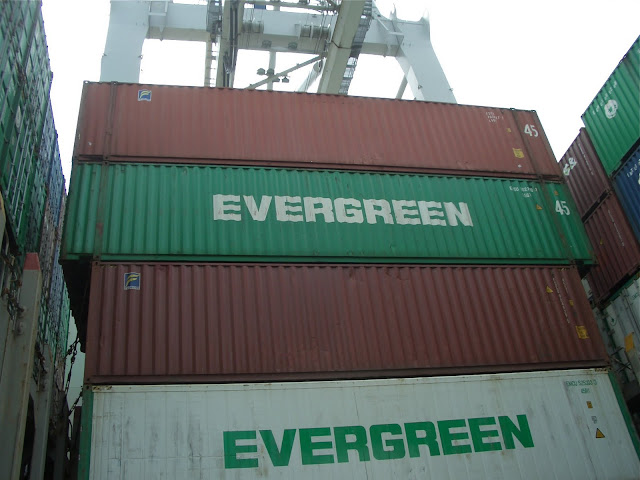 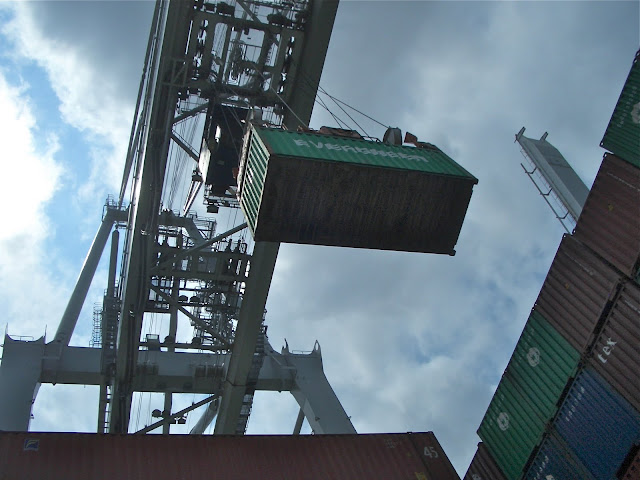 All this preparation continued in the midst of container unloading.  George went back down to the dock where Cindy waited, guarding the gear he had brought from Stuart for the trip south.  This necessary safety and boat-handling gear needed to be put aboard the ship by loading it onto the crane’s container spreader-bar.  Cindy and George took the truck over to the crane and waited for their turn.  About that time, Port Security showed up and things got interesting.  As a part of the enhanced effort for Homeland Security, everyone in the port is supposed to have a TWIC card.  (Transportation Workers Identification Credentials)  The exception was that visitors were allowed in if accompanied by a TWIC card holder – no more than five visitors per cardholder.  Capt. Mike is required to have one of these as a licensed captain (Mike is now known to us as the TWIC-head).  So we were golden…we thought.  Visitors are supposed to be accompanied by the TWIC holder at all times.  Well, since Cindy stayed with the gear while we prepped the boat, she was no longer accompanied.  We thought we had everything worked out with Port Security’s Sgt. Rhue, but his shift was over and this fellow didn’t know anything about that.  Besides that, in his opinion Sgt. Rhue is a pain-in-the-ass!  So, Cindy ran interference while he was threatening $35,000 fines for all concerned and being otherwise unpleasant.  Meanwhile, George frantically texted Mike to show up at the rail of the ship.  When Mike finally made his way up out of the hold, Cindy told Officer Unfriendly that Mike, the TWIC-head, was there in the red shirt.  That seemed to satisfy him but he fired off a parting volley…he had to go and bring back a Federal Agent to certify that the boat was actually removed from the ship.  In the mean time, I found my way back out to dockside and waited with Cindy while George rode the crane up and into the hold of the ship with the gear.  When Port Security returned (with the Fed) he escorted Cindy and I out of the port, Cindy driving the rental car and me driving the Krogen pickup trick.

We drove the vehicles to Thunderbolt Marina and waited for the Krogen.  George called on the cell phone with a small shopping list of critical parts.  The marina gave us direction to a local boating supply and we were able to get what we needed.  By this time it was well after 6 PM.  Cindy decided to go to the grocery store and buy our provisions for the upcoming week.  George and Larry were not planning on staying so the vehicles would be leaving with them.  Cindy returned with the groceries shortly after the boat got to the marina and George performed his magic while the rest of us schlepped cart-loads of gear and supplies and piled in the cabin.  Cindy warmed up some dinner (she pre-cooked and froze several meals in advance) and we popped the cork on a bottle of wine.  It was almost 9 PM and we were whipped!

Because the boat hadn’t been commissioned, there was nothing aboard.  We had no depth sounder, no autopilot and no helmsman’s chair.  There were no pots and pans and no working stove and no coffeemaker.  The only thing we had to cook with was the microwave.  There was protective plastic all over everything - the cushions, mattresses and counter tops.  We had a couple of hand-held VHF marine radios and my iPad for navigation.  That was it!


We had an anchor and anchor rode but the bow pulpit was lashed to the foredeck, the anchor platform and the swim platform were lashed to the upper deck.  We looked very much like a kit boat.


Friday - May 13, 2011
On Friday we ran from Thunderbolt to Golden Isles marina at St. Simon’s Island.  It would have been nice to have a depth sounder when we transited Hell’s Gate and Jekyll Creek.   The horseflies were so bad that we shut the boat up and fired up the generator and air conditioner.
Saturday - May 14, 2011
Saturday we ran down to Camachee Cove marina in St. Augustine.  It sure would have been nice to have radar in the rain and thunderstorms!  The rain blew the horseflies away but we still needed the air conditioner to keep the temperature comfortable inside the boat and to keep the windshield defrosted.

Sunday - May 15, 2011
Mike slipped on the wet plastic on the fly bridge and hurt his back as we left the dock in St. Augustine so we had a short Sunday, going only to New Smyrna Beach.
Monday - May 16, 2011
The following day we went to Melbourne.  The highlight of the day was seeing the Space Shuttle Endeavour launch from the Kennedy Space Center.  We were ten mile north of the launch and looking straight at it.  It was overcast and we lost sight of the Shuttle before the sound got there.  The roar was unbelievable.


Tuesday - May 17, 2011
On our final day we went from Melbourne to Stuart.  When we arrived at the marina we went directly into the Travelift to be hauled out.  We were in the lift shortly after 2 PM and unloaded our gear.  We were in our rental car by 4:30 and five hours later we were back in Brunswick.  It sure was nice to sleep in our own bed!


My impressions of doing a delivery:

Where is Morning Star?